Unlocking Bitcoin to be a fully programmable, productive asset would finally enable Bitcoin to be the backbone of DeFi and a more secure Web3. sBTC solves the problem of writing to Bitcoin in a decentralized manner, enabling easy movement of Bitcoin in and out of Bitcoin layers. This unlocks hundreds of billions of dollars of latent capital into Web3.

Today, a public Stacks ecosystem working group published a new white paper on sBTC, a proposed asset unique to Stacks that will make Bitcoin fully programmable by solving the “Bitcoin write problem” that has frustrated developers for years.

Bitcoin was designed with a limited script that makes programmability more difficult to reduce the blockchain’s attack surface, increasing its security and durability. As a result, Bitcoin layer ecosystems have built programmability on top of Bitcoin, such as Stacks, which enabled fully expressive smart contracts that read and react to native Bitcoin transactions.

Despite the innovations Bitcoin layers have brought, the elusive problem of writing to Bitcoin in a decentralized way has kept Bitcoin from achieving its full potential. sBTC would finally give developers write functionality, unlocking the ability for them to build smart contracts that can programmatically send BTC to Bitcoin addresses through the decentralized peg.

Imagine hundreds of billions of dollars in Bitcoin suddenly becoming available across Web3 apps, partnerships, and ecosystems. It would be the start of a digital revolution, and it starts with making Bitcoin a fully programmable, productive asset.

Bitcoin’s market cap is the largest in all of Web3, more than double that of Ethereum’s, and yet Ethereum’s app economy is worth hundreds of billions of dollars, while Bitcoin’s app economy barely exists.

As mentioned, this is because Bitcoin uses a limited script that makes programmability more difficult by design. Bitcoin Script reduces the attack surface of Bitcoin and makes it much more secure and more durable at the cost of reduced functionality. But Bitcoin’s creator Satoshi Nakamoto also envisioned a future in which other projects might leverage Bitcoin’s security:

Just like the internet has TCP/IP protocol as a foundational layer and more complex layers like HTTP built on top of it (and like how Ethereum has L2s built on top of it, such as Arbitrum and Optimism), we see Bitcoin as the foundational layer for Web3 with separate independent Bitcoin layers, such as Lightning and Stacks, extending Bitcoin’s functionality without changing Bitcoin itself and compromising its security or decentralization.

However, as the white paper points out, an ideal layer needs 3 properties:

To date, no Bitcoin layer has offered all 3 properties, whereas in contrast, Ethereum layers can provide all three for ETH, which has helped them achieve accelerated growth in both users and capital. As the white paper notes, Ethereum layers are primarily for scalability, but for Bitcoin, new layers offer both scalability and additional functionality.

Importantly, no Bitcoin layer has solved that second property: not just how to read and react to the Bitcoin blockchain, but how to write back to Bitcoin. For example, how can a developer build a Web3 app that lets Alice send native Bitcoin to Bob as part of the app’s functionality without having to custody the funds themselves?

Simple enough, but today there is a fundamental issue with pegs. They are not decentralized. They require a custodian, someone (or a group of someones) to process the peg-out and send BTC back to the user’s BTC address.

In other words, you have to trust a centralized entity. That could be a licensed trust company like BitGo (behind wBTC on Ethereum) or a federation of trusted signers to process peg outs (like RSK and Liquid, other Bitcoin layers). But there hasn’t been a way to do this in a secure and decentralized way. In using a Bitcoin peg, you sacrifice the decentralization and security that makes Bitcoin appealing in the first place.

That is, unless you have a decentralized peg.

A new white paper published today proposes sBTC: a novel solution to this issue of a custodial peg that removes the requirement to trust anyone and follows Bitcoin’s ethos of being decentralized and trustless.

sBTC is the first decentralized, non-custodial Bitcoin peg that allows Stacks smart contracts to write back to the Bitcoin blockchain.

With the launch of sBTC, the Stacks layer will be the first Bitcoin layer to enable the movement of Bitcoin in and out of the layer in a decentralized manner, while securing transactions by 100% of Bitcoin hash power. This novel peg operates at the consensus level and doesn’t rely on centralized parties at any point to fulfill peg out requests.

sBTC offers Bitcoin write functionality—the sBTC Bitcoin peg mechanism can write Bitcoin transactions to the Bitcoin chain in a fully decentralized manner. We believe this will unlock hundreds of billions of dollars of latent Bitcoin capital to create a Bitcoin app economy that will rival and ultimately surpass the ecosystems of every other blockchain.

How does it work? We thought you’d never ask.

At a high level, sBTC offers a few unique properties that make it different from any other Bitcoin peg to date.

Importantly, the sBTC design introduces no trusted parties or custodians. The Stacks network uniquely enables this fully decentralized design through the Stacks consensus mechanism Proof of Transfer (PoX) and Stacks’ relationship to Bitcoin.

To dive deeper into how sBTC works, read the white paper here.

This new asset will be a major unlock for Web3 developers. With sBTC, developers can add Bitcoin as a payment method for users, unlocking a large pool of latent capital. Developers can create Bitcoin lending applications, DAO treasuries composed of BTC, and so much more.

The sBTC paper is a glimpse into Stacks’ potential future, and Bitcoin’s. This is just a white paper, and the community, Hiro included, will come together in the coming weeks to debate the project and ultimately, if accepted, go out and build it together. 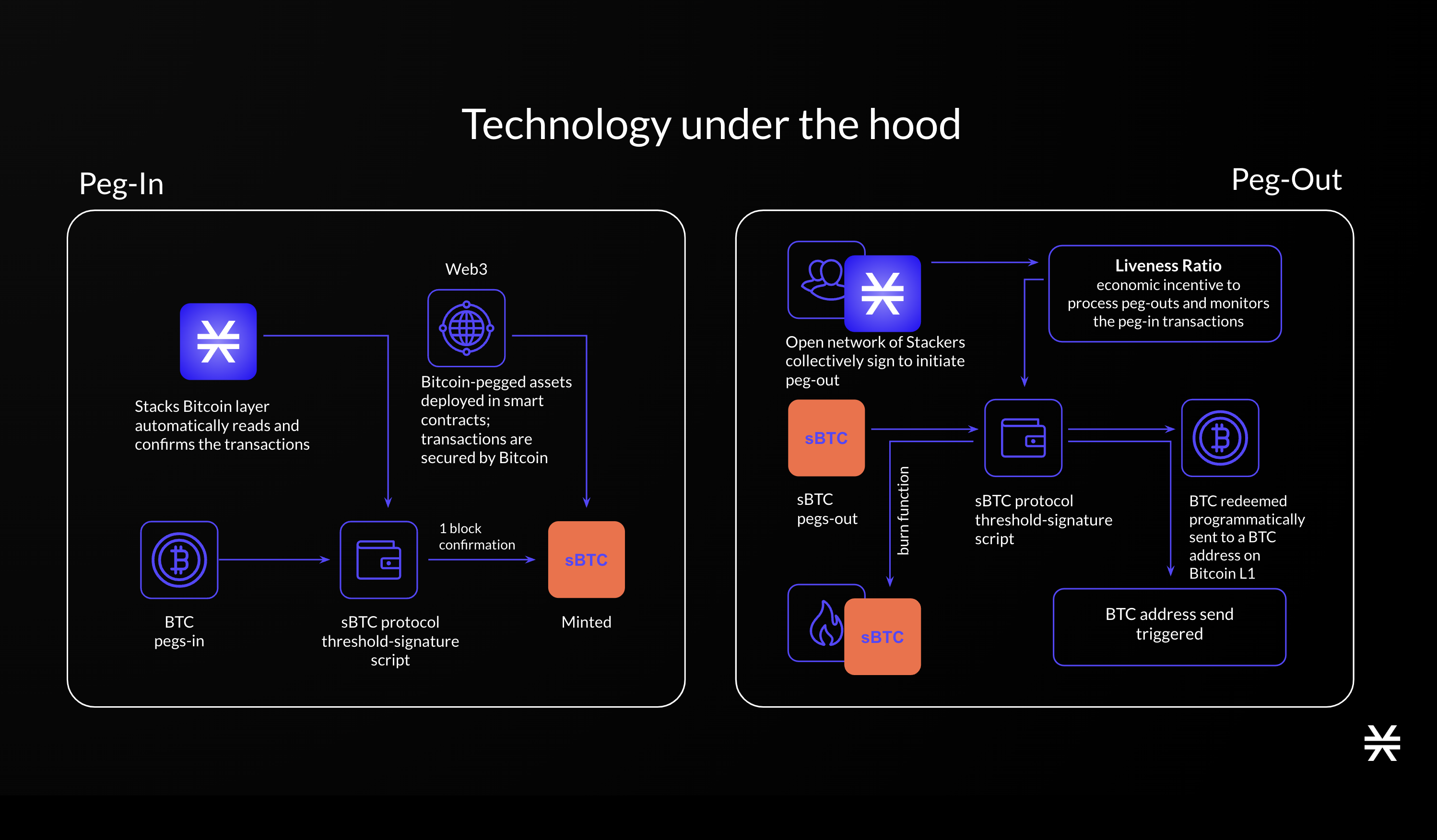 How sBTC works under the hood

Guide To Starting a Career in Web3

Why Developers Should Build on Bitcoin in 2023