Exploring the Scope of the Bitcoin Ecosystem Today

Deutsche Bank research analysts say Bitcoin could become the 21st-century digital gold, and 86% of central banks are developing their own cryptocurrencies to catch up with Bitcoin. You know Bitcoin is doing something right when the very banks whose power Bitcoin undermines are trying to play catch up. The Bitcoin ecosystem has revolutionized our fundamental understanding of money, but there is a lot more to Bitcoin than just being a store of value.

As we build new global economies for the digital world, they need to be built on sound money. They need to be built on Bitcoin. In this post, I’ll share my thoughts on how Bitcoin has already created a thriving economy even with its limited capabilities. Then, I’ll explore how Stacks expands the Bitcoin ecosystem by enabling Bitcoin smart contracts that extend the value and functionality of the original blockchain by unlocking a myriad of new use cases.

What Is the Bitcoin Ecosystem?

As a currency, Bitcoin has recorded massive growth and adoption in the last decade. From the first known use-case of someone buying a couple of pizzas for 10,000 BTC to becoming adopted as a legal tender in El Salvador, Bitcoin has cemented a position as natively digital money.

Today, Bitcoin has a market cap of over $320 billion. Yet this impressive figure barely scratches the surface of what constitutes the Bitcoin economy.

The Bitcoin ecosystem encompasses the market cap of Bitcoin, yes, but an entire economy exists around Bitcoin to make one person sending Bitcoin to another possible, including the software developers who maintain Bitcoin’s code, miners mining new Bitcoin blocks, nodes running the network, exchanges allowing users to trade, wallets to hold Bitcoin, and more.

And that list doesn’t even begin to touch on the possibilities of Bitcoin applications enabled by Stacks. I’ll get back to that later.

Unpacking the Components of the Bitcoin Ecosystem

There isn’t a single standard for defining the entire scope of the Bitcoin ecosystem, so let’s take a look at some of the different components to give you a sense of just how active the Bitcoin community is today and why you should be excited about building applications for Bitcoin.

Bitcoin was originally built by software developers, and there is still an active development community today. At its heart, the Bitcoin protocol has a community of committed contributors, organizations, non-profits, and foundations that maintain the source code and support network upgrades. Organizations such as Brink and Chaincode Labs support the Bitcoin protocol and network with research and development, education, and funding for innovators building for Bitcoin.

Contributions to Bitcoin development are permissionless, and any individual or team can contribute to Bitcoin. According to Electric Capital’s 2021 Developer Report, there are 680+ individual open-source developers working on Bitcoin, and Bitcoin consistently attracts more than 100 new developers into its dev community every month, serving as an educational launchpad for developers entering Web3 and crypto.

In the last year, Bitcoin miners have earned a seven-day average of $40.4 million per day in block rewards and transaction fees for maintaining the Bitcoin network. A whole subset of businesses are devoted to designing and manufacturing better mining hardware to maximize those rewards, and Bitcoin’s mining hashrate, a function of the computing power securing the network, has a seven-day average of 271 million TH/s across the top 15 Bitcoin mining pools.

We’ve touched on all of the players who make Bitcoin possible. Now let’s talk about where users fit in. How does an individual buy Bitcoin? They need on-ramp and off-ramp solutions that provide ways for users to buy and sell Bitcoin, enabling the conversion into fiat and vice versa, as appropriate. Today, there are more than 300 crypto exchanges, the majority of which enable Bitcoin trades. Those options range from centralized and regulated institutions like Coinbase to decentralized peer-to-peer networks like Bisq.

As if 300 exchanges for a global currency weren’t enough, there are more than 35,000 Bitcoin ATMs around the world where you can walk up and buy Bitcoin on the spot.

In addition to these on-ramps, I also want to highlight payment network processors and merchant solutions as well. For instance, Lightning Network’s work in enabling instant payments and settlements and Liquid Network’s solution for the settlement of Bitcoin-based assets also help to expand Bitcoin’s use in traditional finance.

In the Bitcoin economy, wallets are fundamental to user identification and authentication when interacting with decentralized applications, and, of course, for hodling.

There is a long list of companies that offer different kinds of Bitcoin wallets, ranging from software wallets (including desktop wallets, mobile wallets, and browser extensions) to hardware wallets to facilitate cold storage of Bitcoin offline. Some of the major players include Electrum, Ledger, Exodus and Trezor, and those wallets serve a lot of users.

All of the statistics and companies I mentioned above represent a snapshot of where Bitcoin is today. Let’s talk about where the Bitcoin ecosystem is going.

I have conviction in the long term, sustainable value of Bitcoin. It’s a revolutionary innovation and a uniquely valuable asset. But on its own, Bitcoin is not programmable, and it’s not a productive asset. Its limited scripting language is  by design and increases its security and decentralization. However, you need that programmability to unleash Bitcoin’s full potential and unlock the rest of the Bitcoin economy. That’s where Stacks comes in.

Stacks lets you leverage Bitcoin’s amazing attributes - its unparallelled security and decentralization - without changing them. It makes Bitcoin a productive asset and a foundation for new decentralized applications.

Stacks brings fully expressive smart contracts to Bitcoin and does so through its unique relationship with the original blockchain.

Today, Stacks has 120+ full time developers and dozens of entities, including us at Hiro, that are working to productize Bitcoin’s programmability and make it more accessible to developers, enabling a new wave of innovation. In fact, Stacks is the largest and fastest-growing Web3 project on Bitcoin.

Learn more about Stacks' connection to Bitcoin in the first episode of Web3 on Bitcoin Explained:

Now that Bitcoin is programmable, developers can unlock the final pieces of the Bitcoin economy and build new applications for Bitcoin including DeFi, NFTs, DAOs and more. That innovation is already appearing on Stacks, and a new wave of developers are building the Bitcoin applications of tomorrow.

This accelerating innovation can also be seen in Bitcoin NFTs. Numerous marketplaces, such as Gamma and TradePort, have provided over 8M STX trading volume to date for hundreds of thousands of Bitcoin NFTs.  This new opportunity for one’s digital property to have provenance on the most secure blockchain, along with the ability to tap into Bitcoin’s trillion dollars of capital, has tremendous promise for creators and their fans.

We are even seeing entirely novel use cases being built on Bitcoin, such as CityCoins, which gives communities the power to support their cities, and Sigle, a writing platform that lets writers earn BTC from readers without those readers spending their principal. And we’re just scratching the surface. I firmly believe that the newfound programmability that enables these innovative apps - as well as those yet to be seen - will be a critical driver of growth for the Bitcoin economy for years to come.

Stacks Helps You Build for the Bitcoin Ecosystem

If you believe Bitcoin is sound money and can be a global reserve currency, you need decentralized on and offramps in order to trade in and out of it while maintaining the ethos of trustlessness that makes Bitcoin so powerful. You need Bitcoin to become a productive asset. For that you need programmability. That’s where Stacks comes in.

Through Stacks, developers can build new applications for Bitcoin, a blockchain that has more capital than any other Web3 ecosystem, and one that is more likely than any other to stand the test of time. Bitcoin is a massive opportunity for builders, and Stacks provides the infrastructure for developers and entrepreneurs to leverage that opportunity.

Download our free guide to Bitcoin's evolution to learn more about how Bitcoin became an ecosystem for Web3 apps: 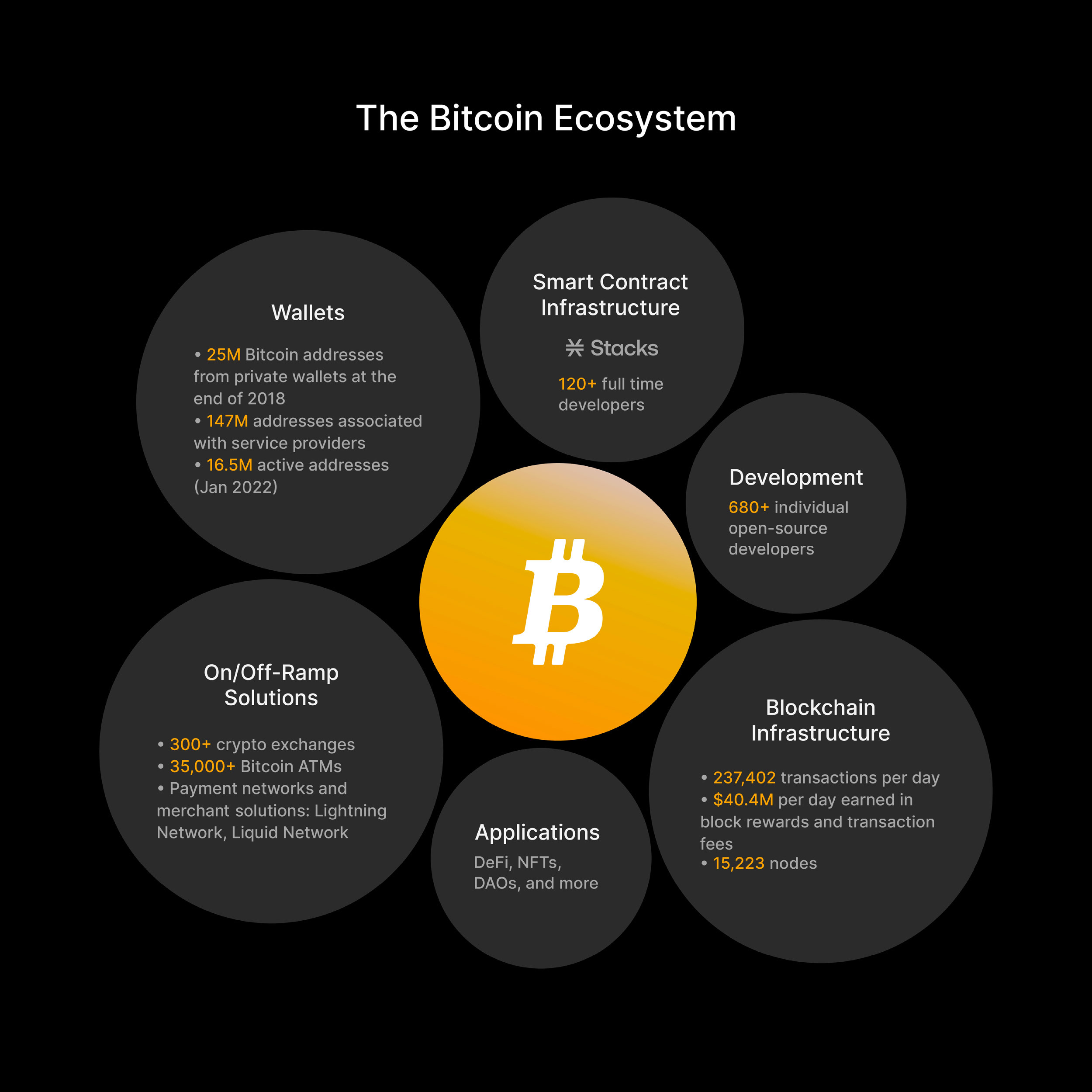 How Did Bitcoin Evolve Into an Ecosystem for Web3 Apps?

Attention Web3 Developers: There’s a Trillion-Dollar Opportunity Waiting for You