A Developer’s Guide to Stacks 2.1

Want to know how the upcoming Stacks 2.1 upgrade will affect the developer experience and Hiro developer tooling? Don’t worry: we’ve got you covered.

The countdown begins to Stacks 2.1, the next protocol upgrade for Stacks. This major network upgrade for the Stacks blockchain will strengthen its connection to Bitcoin by making it easier to earn Bitcoin yield and easier to create applications that leverage Bitcoin DeFi and Bitcoin NFTs.

In this blog, we’ll cover how 2.1 will affect the developer experience and Hiro tooling, how 2.1 will impact wallets and exchanges, and finally how 2.1 enables new Bitcoin use cases.

Note: for a general overview of 2.1, please check out this blog post from the Stacks Foundation before reading this post.

Changes in Stacks 2.1 will make stacking easier. These changes require updates to Stack’s unique consensus mechanism, Proof of Transfer (PoX). Throughout the blog, we may refer to these changes as part of “PoX 2.”

Hiro builds developer tools that bring fully expressive smart contracts to Bitcoin. Stacks 2.1 will make it easier for developers to build the future of Web3 on Bitcoin. Here’s what each of our products unlocks for 2.1.

Test Drive Your Smart Contracts on Stacks 2.1 in Clarinet

You don’t have to wait until the release of Stacks 2.1 to test out how the network upgrade will impact your smart contracts. The upcoming release of Clarinet 1.0 will empower developers to test out Stacks 2.1, so you can be fully prepared when the upgrade goes live. In particular, this release will add Clarinet Integrate support for 2.1. Learn more about Clarinet Integrate here. We will share instructions on how to test 2.1 with the next Clarinet release.

In preparation for Stacks 2.1, the Stacks API has added support for a number of changes, including:

Support for Distinguishing Between Contract Versions

We augmented existing endpoints /extended/v1/tx/<txid> and /extended/v1/contract/<contract-principal> to return a Clarity version.

Stacks 2.1 also adds support for new coinbase transactions that pay to either A) a smart contract or B) an alternative standard principal. The latter permits the miner to pay to a cold storage address automatically. The API now returns a new coinbase alt_recipient property on applicable requests to support coinbase-pay-to-alt-recipient transactions.

Upcoming PoX 2 changes require support for a number of new functions, such as stack-increase, stack-extend, and delegate-stack-extend. Support for these features will be added to the API Rosetta implementation soon, and the locked STX amount will continue to function as expected during and after the PoX transition. More information on the PoX transition phases below.

These changes are works in progress and will be available with the next 2.1 compatible release of the API.

Stacks 2.1 allows specifying memos when transferring STX within contract calls (which can be done with the new Clarity function stx-transfer-memo). The Stacks API has now added support for parsing, storing, and returning the memo field that can be included in Stacks 2.1’s stx_transfer_event.

Here’s a sample Clarity2 versioned-smart-contract with a memo field:

The resulting tx from the API will have a stx-transfer event with the associated memo:

Stacks 2.1 makes it easier to earn Bitcoin yield by introducing improvements to stacking. Stacks.js will support this new functionality in the @stacks/stacking package of Stacks.js.

Stacks.js will also have the capability to create and serialize the new “versioned-smart-contracts” transaction types, which allows developers to deploy smart contracts using the new Clarity 2 features. For a work in progress list of those Clarity 2 features, click here.

The 2.1 upgrade is mission critical for Subnets—the upcoming scalability solution for Stacks. For example, withdrawals on subnets are dependent on 2.1 features, and multi-party contracts and multi-party signers are both contingent on 2.1 for signing. As part of our efforts to test and improve the subnets' performance, we are focusing on key areas, such as MARF and mempool. Follow subnets' progress on GitHub.

New Data in the Stacks Explorer

How 2.1 Impacts Wallets and Clients

For developers working on wallets and related clients, 2.1 brings a number of important changes to how stacking is handled. In particular:

The Hiro Wallet team is already at work to support these 2.1 changes by adding the option to increase either the number of cycles or the amount of STX locked for an existing Stacking commitment, instead of having to wait until their STX unlock first. They will also be able to earn BTC to native segwit addresses in addition to legacy ones.

‍Important note: If you are an existing user of the Hiro Wallet with an ongoing stacking commitment at the time Stacks 2.1 goes live, you will need to stack or delegate your STX manually once again, since stacking on Stacks 2.1 is not backwards compatible with Stacks 2.0. Please see the next section for more details.

Exchanges offering stacking to their users will need to upgrade their code to .pox-2. The original pox code will be defunct after the launch of 2.1. Importantly, the PoX transition will happen in phases. Here are 3 important periods of transition with the 2.1 rollout and how PoX-2 will be fully activated:

These timelines have a critical impact on stacking for users and exchanges:

For more information on these periods, please refer to SIP-015 that details the network upgrade.

For developers working on exchanges, a testnet (or private testnet) will be available in mid-October to try out the new stacking functionality in order to create a more seamless transition. Developers should also use an officially-supported client library for .pox-2 if they are able, such as the @stacks/stacking package of Stacks.js offered by Hiro.

Bitcoin Use Cases Enabled by Stacks 2.1

One of the most exciting features that the 2.1 upgrade unlocks is the ability to directly send Stacks assets to Bitcoin addresses. Then, only the owner of the Bitcoin address can manipulate the asset on the Stacks chain via a specially-crafted smart contract that can recognize their Bitcoin transactions as contract-calls.

While this can be achieved today if the Bitcoin address owner is willing to create a Stacks address first, Stacks 2.1 removes that requirement altogether. Now use cases like airdropping NFTs to Bitcoin wallets are possible. This simplifies the application-onboarding experience for users and developers alike: users can get started with Stacks applications with only a Bitcoin address.

2.1 also adds support for stacking to a native segwit or taproot address. This saves users Bitcoin transaction fees and enables new stacking functionality, such as building a decentralized stacking pool that pays BTC directly to participants.

Whilst we are near code completion for 2.1, the remainder of Q4 will be spent testing and hardening 2.1.  There are a lot of moving parts to get done before the release of 2.1 in Q4 this year, and we are releasing updates for all Hiro products leading up to the release of 2.1, so as soon as the upgrade is live, you will be able to take full advantage of those changes. You can follow along with progress on Stacks 2.1 here.

Excited for 2.1? Have more questions than answers? Take a 2.1 quiz from the Stacks Foundation to help us identify any information gaps that need addressing about the upcoming upgrade. 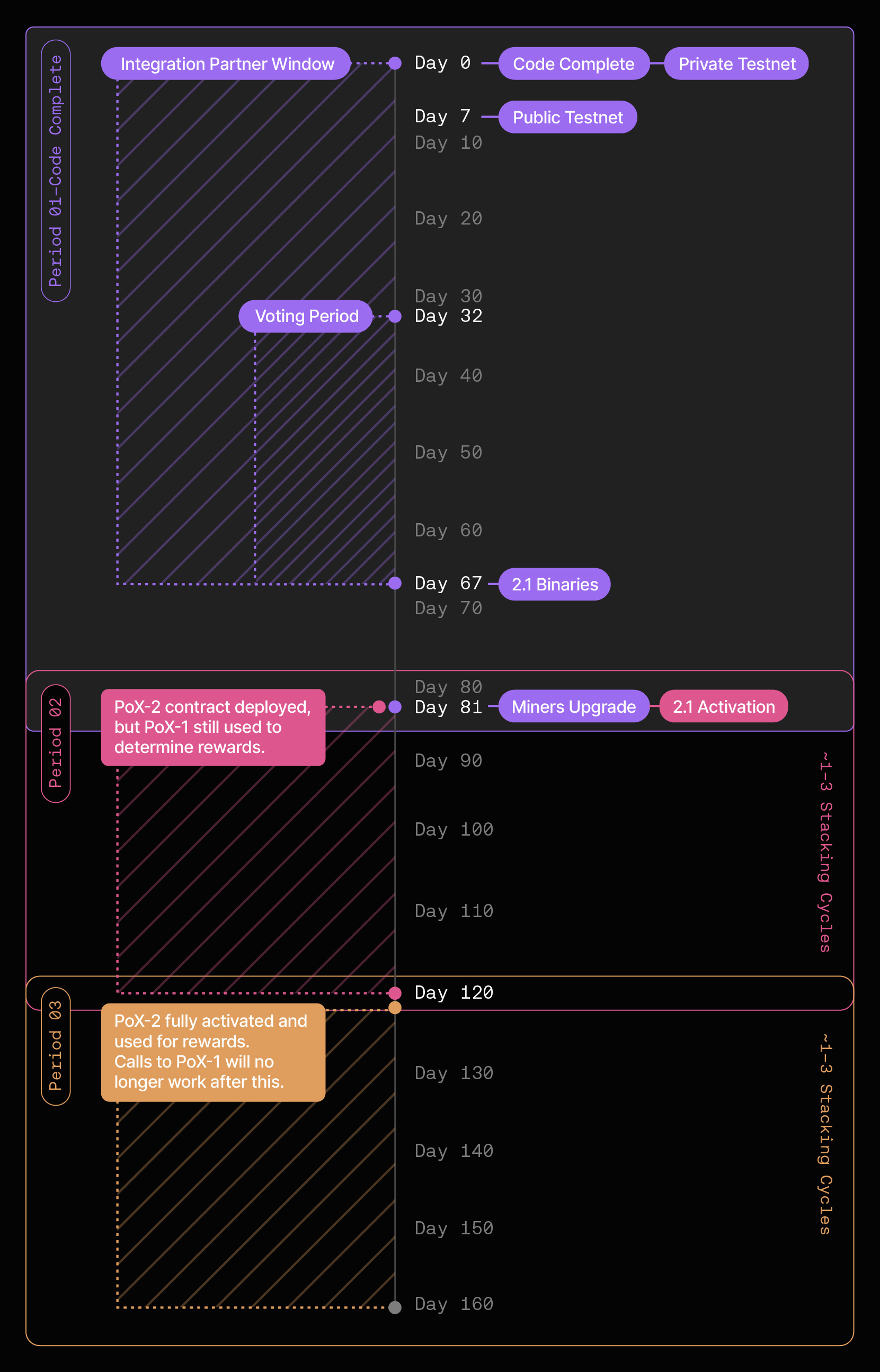 A timeline of Stacks 2.1

What Is a Web3 API and Why Does It Matter?